In October 2007 while the Chief Coordinator, Sr. Stella – Maris was visiting UK, Sr. Theresa got an email from Fr Shadi, a priest from Bo Diocese Sierra Leone inviting

Upon arriving back in Nigeria – after prayerful reflection and thorough investigation Sr. Stella- Maris went to Sierra Leone with some members. Pro Labore Dei was given pieces of land in Bo and Mattru Jong. 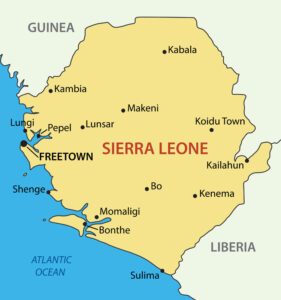 Pro Labore Dei. On the 8 December 2007, Pro Labore Dei members went on their first missionary journey to the West Coast of West Africa – Sierra Leone where we now have 3 branches with the main building being in Bo as of August 2008.

Pro Labore Dei in Sierra Leone started in 2008 have continued to bring sucour to many faces, by feeding the hungry, clothing the naked, educating the young as we have a nursery school in this regard. One of such earlier beneficiaries is Agness Mosery, a blind lady who has graduated from the university as a teacher. We also give accommodation to the homeless; visit the sick and the imprisoned. Other activities of Pro Labore Dei in Sierra Leone include fishing clients, and empowering them with skilled training exercise. One of such earlier beneficiaries is Tom Bende trained in weaving.

We also feed the clients with the word of God and prayer. For instance, many clients come for prayer every Thursday. There is also devotion to the Holy Spirit which they attend every Tuesday. The widows also have their own prayer day on Fridays. Therefore, apart from taking care of the physical needs of the clients, in Sierra Leone, they are also given the spiritual food regularly